For those who aren’t familiar with the Inner Hebridean island of Iona, it is a 3.4 square mile island just off the much larger island of Mull on the western side of Scotland. Iona has been a site of spiritual pilgrimages for many centuries, having been settled by St. Columba and his hardy band of monks in 563 after being exiled from his homeland in Ireland. Yep, 563. The history of Iona’s monastery and abbey includes the writing of the famous Book of Kells, Viking attacks over several hundred years, destruction during the period of Henry VIII’s dissolution of the monasteries, and its reconstruction in the 20th century.

Today, Iona is home to about 200 people and hosts thousands of visitors annually. Many of the travelers come as spiritual pilgrims to this center of Celtic Christianity, considered a “thin place” where the space between heaven and earth is narrowed and so connection to God is more easily perceived.

What does one do on Iona? There are services at the Abbey every morning and evening, run by the Iona Community, an ecumenical Christian community committed to social justice and peace. The Iona Worship Book is appreciated by many churches and individuals around the world for the beauty of its language. Worshipping in the Abbey calls one to special reverence and a deep appreciation of the power of a place to which people of faith have been drawn for 1400 years. Communion services are on Thursday night and Sunday morning; we attended both during our stay. John, an Anglican priest who is a member of the Community and resident on Iona for the summer, celebrated. The communion was passed from person to person, which could be awkward, but we found it intimate and holy.

The other classic Iona Experience is walking. The only cars allowed on the island are those belonging to those who live there and delivery vehicles, so we walked and walked – to and from Ardoran (our fantastic B&B), to dinner, to the Abbey, and just to appreciate the serenity and beauty of the Island. More ambitious visitors walk all the way to St. Columba’s Bay, but we were more than satisfied with (and exhausted by) our general vicinity, walking into “town” and the longer walk to the big bay. On our third day, we discovered the fabulous Iona Taxi people (thank you, God!), who saved our knees and feet on a couple of trips to the Abbey (.7 miles each way from our lodging, which doesn’t sound like much, but it adds up over a day!)

I mentioned Iona’s serenity. The peace there is so pervasive and is part of the spiritual power. Tiny rocky beaches (one just in front of our lodging), sheep and lambs, a few people ambling or cycling, sun and clouds. Everything combines to bring you to a place of respite, calm, and gratitude. Is God closer to us here, or are we just more conscious of the holy when out of our frenetic existence? Is the land infused with grace by the spirit of so centuries of faithful pilgrims? I don’t know the answers. I only know that my heart and soul were filled by my visit to this special place.

It is said that all who come to Iona will visit at least three times. I have one to go. Let it be soon. 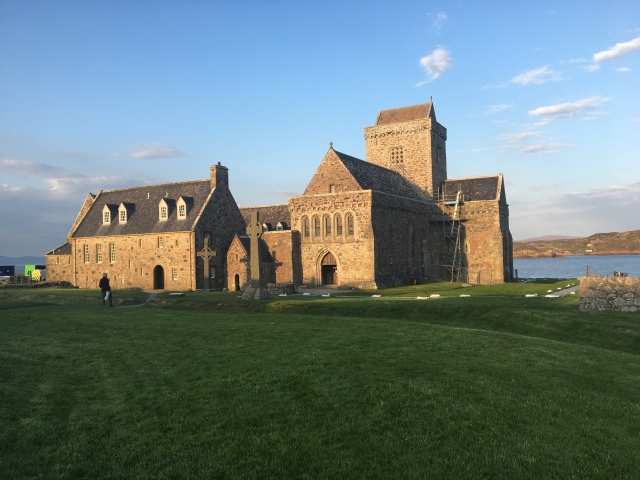